Here we feature additional information and interesting articles which have appeared in the local and national press. 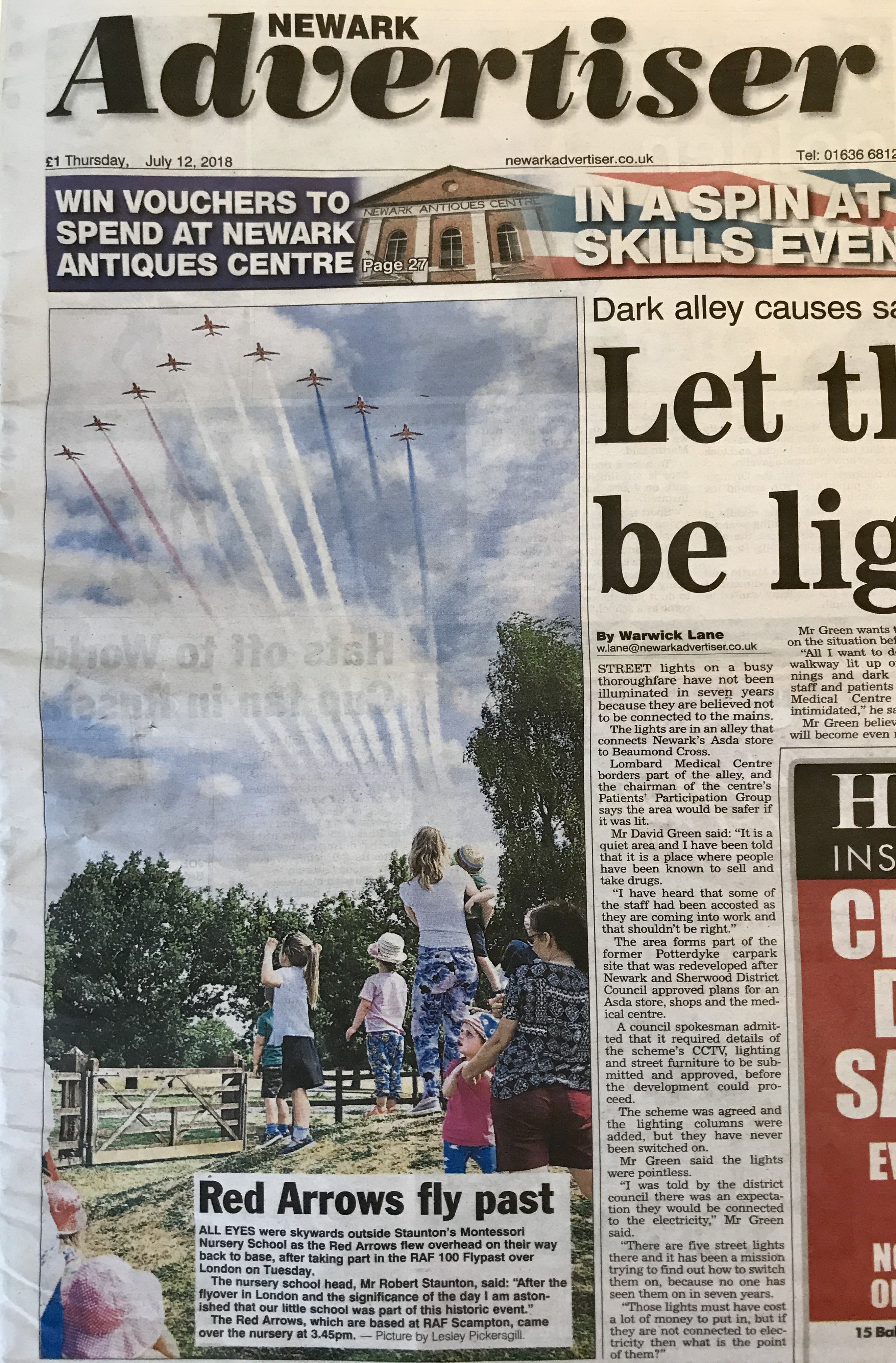 Staunton Montessori Children in awe over Red Arrows fly past 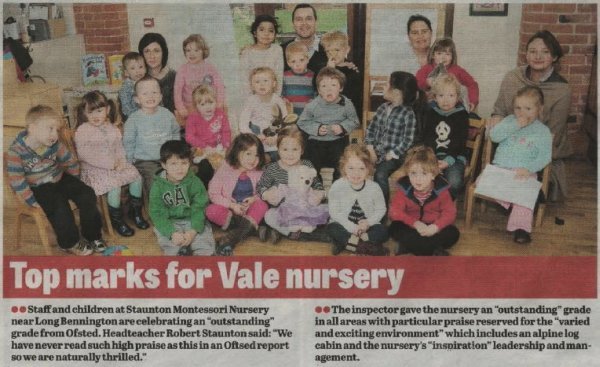 •• Staff and children at Staunton Montessori Nursery near Long Bennington are celebrating an “outstanding” grade from Ofsted. Headteacher Robert Staunton said: “We have never read such high praise as this in an Ofsted report so we are naturally thrilled.”
•• The Inspector gave the nursery an “outstanding” grade in all areas with particular praise reserved for the “varied and exciting environment” which includes an alpine log cabin and the nursery’s “inspiration” leadership and management.

A NURSERY school has achieved two consecutive outstanding Ofsted reports — a rare achievement according to its head. Staunton Montessori Nursery School was judged outstanding both in this year’s report and in its last inspection in 2008. Head Mr Robert Staunton said inspectors were impressed with its high quality of care and education, and its newly-built alpine log cabin, used for outdoor learning.

“This is like a double Olympic gold medal for us,” he said. “The whole team has done amazingly well and I’m so glad that local children can benefit from the enriching and exciting experiences on offer. We have never read such high praise as this in an Ofsted report, so we are naturally thrilled. “The inspector we had has a reputation for being extremely thorough. “We are particularly pleased with the judgement since we were inspected under the revised early years’ foundation stage which came into force only in September 2012. We feel very validated by Ofsted as they have recognised the impact we are having on children and families”

The school’s honorary patron. Dr Miriam Stoppard, a nationally-known expert on pregnancy and health, said the result was magnificent. She wrote to the head: ‘Having visited your school several times I know that you are worthy of such recognition.” 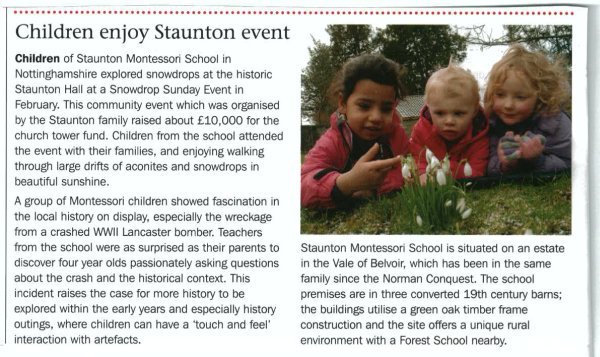 Nursery graded outstanding in every category

A NURSERY school at Staunton-in-the-Vale, near Long Bennington, has been graded “outstanding” in every category by Government inspectors.

Staunton Montessori Nursery School was praised by Ofsted in all areas, including leadership and management and quality and standards.

Inspectors were particularly impressed with the close relationship between the nursery and parents, the range of activities on offer and the staff’s willingness to embrace change.

In her report, released on Tuesday, inspector Christine Hands said: “Staunton Montessori Nursery School provides children with a rich learning experience that not only recognises their uniqueness but also provides an environment that both motivates and excites.”

Headteacher Robert Staunton said: “This is a tremendous result for the school community.

“We have an outstanding group of children and staff here who are achieving great things.

“This is the Olympic gold of the education sector.”

The school’s honorary patron Dr Miriam Stoppard, who is an agony aunt and journalist, said: “Many huge congratulations on being outstanding and one of the top schools in the UK – two things I never doubted.”

The nursery has 65 children on roll and another 65 in the primary tutorial, which has a 95 per cent pass rate for the 11 Plus exam.

Charlie (2) and Yasmin (3) preparing pastry at Staunton Montessori Nursery School.
A village nursery has been judged outstanding in all areas by Ofsted.

Staunton Montessori Nursery School at Staunton is believed to be one of the first nurseries in Nottinghamshire to get the grade in all 14 areas.

Its Ofsted report said: “Staunton Montessori Nursery School provides children with a rich learning experience that not only recognises their uniqueness but also provides an environment that both motivates and excites.”

The report said staff recognised the importance of listening to and valuing what children said and used that knowledge to plan exciting learning experiences.

She highlighted the need to educate a child’s whole personality rather than just concentrating on the teaching of knowledge.

Youngsters are taught in small groups and are encouraged to undertake practical tasks such as buttoning coats.

Another area highlighted in the report were the activities on offer at the nursery.

The report said: “Visits from a member of the travelling community, complete with caravan and horse, give children a feel of the enclosed spaces some people live in.

“African music, visits from a vet and cooking foods from other cultures provides extra interest as well as wonderful opportunities for discussion.

“Baking cakes and bread is a popular activity enabling children to weigh, measure, mix and eventually eat their creations.”

The nursery is run by Mr Robert Staunton, the head and managing director, and his wife, Mrs Adrienne Staunton, from their home, Chapelside Farmhouse, where a 19th Century barn has been converted into a classroom.

Mr Staunton said: “This is a tremendous result for the school community. We have an outstanding group of children and staff here who are achieving great things.”

He is one of the first men in the country to obtain the qualification and has been asked by the Government to appear in a television advertisement campaign to try to get more men involved with infant education.

Mr Staunton is a visiting lecturer at Lincoln University and has been elected to the Early Years Consultation Group, which deals with issues of funding and quality in the nursery sector.

Assistant teacher Liliane Probst is in the background with pupil Findley (3) as Mrs Adrienne Staunton works with pupil Benji (4).

A COUPLE plan to double the size of the Montessori nursery school they set up on the ground floor of their home.

The school at Chapelside Farmhouse Staunton-in-the-Vale, caters for 20 two to four year-olds using an approach pioneered in 1907 by Italy’s first woman physician, Dr Maria Montessori, a specialist in child psychology.

The directors and teachers at the school, Mr Robert Staunton (29) and his wife, Adrienne (30) set up the nursery three years ago.

They believe it is the only one in Nottinghamshire.

Mr Staunton said: `We had no idea how successful it would be.

“We started with groups of four or five children but people came along and loved what we did, and suddenly we were over-subscribed by a long way.”

The couple are converting an adjoining barn so they can cater for up to 40 children.

Mr Staunton said: “We are converting one of the 19th Century barns to create one big, open light space.

“We are also looking to develop a new play area outside and would like to get a pony to maximise on the rural aspect.”

Building work on the conversion is due for completion in January, with the couple looking to recruit additional teachers to support their two staff, Mrs Angela Sutton and Miss Liliane Probst.

The Montessori approach focuses on working in small groups, with children encouraged to undertake practical tasks such as tying shoelaces and buttoning coats themselves.

Dr Montessori emphasised social interaction and the need to educate the whole personality rather than the teaching of a specific body of knowledge.

Mr Staunton said it would be possible to extend the nursery to take primary aged children although they were keen to focus on the early years at the moment.

To take primary children would require the school to be an independent school, while at present parents can use the local authority’s Nursery Education Funding for Parents scheme to cover most of the cost.

Mr Staunton said: “We will see what happens step by step. We have other barns we would like to convert into a tea shop and for activities such as yoga.” 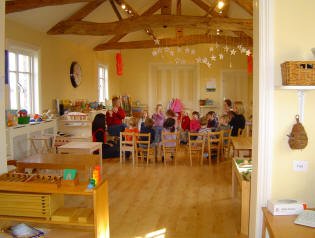 ‘
Renovations to our beautiful 19th century barns
have created a wonderful atmosphere for the Montessori school.