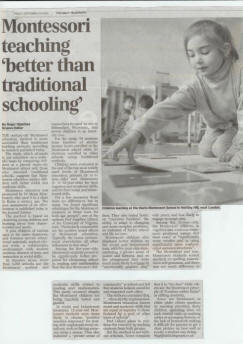 Montessori education was pioneered by Dr Maria Montessori, who used it in a slum in Rome a century ago. The new assessment of its effectiveness is published today in the journal Science. The method is based on observing young children and learning about their characteristics and needs. It puts children of various ages in the same classroom, and features special educational materials, student-chosen work, a collaborative environment with student mentors, absence of tests, and instruction in social skills. In America alone, more than 5,000 schools use the Montessori method, and researchers focused on one in Milwaukee, Wisconsin, that serves children in an inner-city area.

For the study, 59 students from families of similar income levels enrolled at the Montessori school while 53 students enrolled in other schools using traditional methods. Children were evaluated at the end of the two most widely used levels of Montessori education: primary (3 to 6year-olds) and elementary (6 to 12-year-olds) for their cognitive and academic skills, and for their social and behavioural skills.

An analysis of students’ academic and social scores compares a Montessori school with other elementary school education programs.

For a few measures there were no differences but in many “we found significant advantages for the Montessori students in these tests for both age groups”, one of the authors Prof Angeline Lillard, of the University of Virginia, said. “Particularly remarkable are the positive social effects of Montessori education. Typically the home environment overwhelms all other influences in that area.” Among the five-year-olds, Montessori students proved to be significantly better prepared for elementary school in reading and mathematics than the non-Montessori children. They also tested better on “executive function”, the ability to adapt to changing and more complex problems, an indicator of future school and life success.

Montessori children also displayed better abilities on the social and behavioural tests, with five-year-olds demonstrating a greater sense of justice and fairness. And on the playground they were much more likely to engage in “emotionally positive play” with peers, and less likely to engage in rough play. Among the 12-year-olds, the Montessori children, in cognitive and academic measures, produced essays that were rated as “significantly more creative and as using significantly more sophisticated sentence structures”. The Montessori and non-Montessori students scored similarly on spelling, punctuation and grammar, and there was not much difference in academic skills related treading and mathematics. This parity occurred despite the Montessori children not being regularly tested and graded.

In social and behavioural measures, 12-year-old Montessori students were more likely to choose “positive assertive responses” for dealing with unpleasant social situations, such as having someone jump a queue. They also indicated a “greater sense of community” at school and felt that students helped, cared for and respected each other. The authors concluded that, “…when strictly implemented, Montessori education fosters social and academic skills that are equal or superior to those fostered by a pool of other types of schools”.

Prof Lillard plans to continue the research by tracking students from both groups. But the method is not without criticism. Some complain that it is “too free” while others see the Montessori principle of “freedom within limits” as stifling creativity. Some see Montessori as elitist while others question its teaching priorities, decry children spending time on such menial tasks as washing tables or arranging flowers, or the lack of homework making it difficult for parents to get a clear picture on how well or poorly a student was doing.