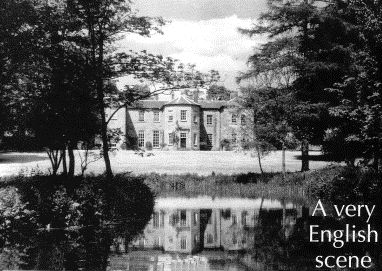 A view of the rear of Staunton Hall in Nottinghamshire, from the lake circa 1930.

A quintessentially English rural scene – a minor road which dips and bends with a glimpse of an old towered church through the trees, leading to a crossroad in a small hamlet, with a pub on one corner and a farm on the other.

There is no signpost at the junction, but those travellers with a good map will take the road opposite the pub and pass an old rectory before coming to two gates, one of which leads to the church and the other to the parkland which surrounds Staunton Hall in the Vale of Belvoir.
The north front of the house, which one sees on first approaching the hall, gives the appearance of great antiquity and peacefulness – almost as though the house had always been there.

The setting of the house is enchanting, across a lawn which in early springtime is covered with aconites and later by daffodils, with the small copse behind the church filled first by snowdrops and later by primroses.
The Stauntons have lived on this land since the Norman Conquest and possibly before, making them one of the oldest families in the country still living on their original estate.

The Domesday Book records that Malger Staunton held the Manor of Staunton by the feudal tenure of the castle guard at Belvoir. The Staunton Tower at Belvoir Castle still commemorates the Stauntons’ privilege and duty. 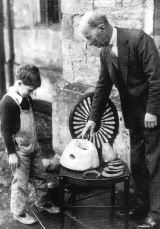 The Rev George Staunton and his grandson Edmund the present squire, in 1949, with artefacts discovered at Staunton.

A bicycling party outside Staunton Hall in 1905.
In the centre is the Rev. Harvey Staunton who died in Mesopotamia during the First World War and was succeeded as the squire by George Staunton, on the right. 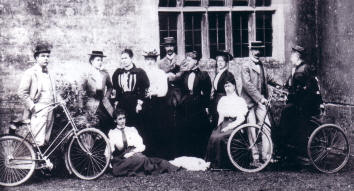 Captain George Staunton D.C.M., Royal Artillery, in 1917, squire for half a century.

The front of Staunton Hall around 1920, still with 18th century rendering. 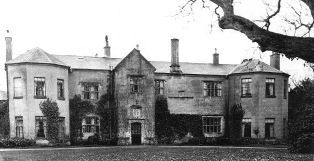 An Engraving of the hall in which Sir Walter Scott’s novel “The Heart of Midlothian” is depicted as Willingham, the home of Mr Staunton. 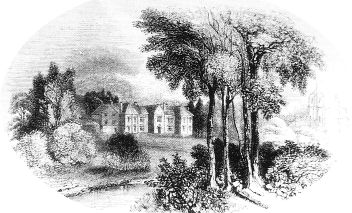 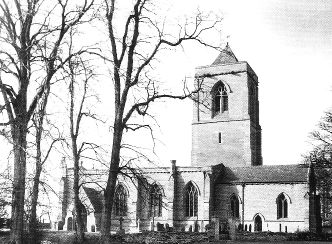 The tradition is that the golden key of the tower is presented by the Head of the Staunton family on the occasion of the Sovereign paying a visit to Belvoir Castle. A further custom which dates back to the Middle Ages is the practice of the Stauntons presenting a new bell rope every three years to Bottesford Church. The bells of the church would be rung at a time of approaching danger and heard across the Vale.
William Staunton, who in 1183 proposed to join Richard I on the Third Crusade to Jerusalem, sent in his place Hugh Travers, a villein on his Alverton estate. Travers was first emancipated and on returning safely from the Holy Land was granted land on a yearly rent of a pound of incense and a pound of cumin (caraway).

At the outbreak of the Civil War in 1642, Colonel William Staunton committed himself, 1,200 foot soldiers and a troop of horse at his own expense, to the cause of Charles I. During the colonel’s absence, Cromwell’s soldiers surrounded the manor house and although his wife Anne attempted to defend the house, she was finally forced to surrender. Colonel Staunton returned to a ruined house and faced fines of over £800 for having taken arms against the Parliament.
The present house dates from this time with the date 1554 inscribed over the front door – the inner door still bears the bullet holes of the Roundheads.

The 14th century church of St. Mary was also damaged during the conflict, with several of the monuments suffering mutilation. The church was restored in 1853 but the north aisle with its medieval doorway and tower was hardly touched.

The 18th Century – a period when many old mansions were demolished to be replaced by fashionable Georgian houses, found the Stauntons insufficiently wealthy to completely rebuild Staunton Hall.
Between 1720 and 1790 the hall was heightened and extended, the result being an engaging mixture of Tudor stone and Georgian brick. That century also saw the Staunton line pass through the female line although the Staunton name was preserved.
Sir Walter Scott, after possibly staying at the hall in the 19th Century, made Staunton the Willingham in his Heart of Midlothian, describing it as “one of those beautiful scenes which are so often found in England.”

Two descendants of Malger Staunton held the Manor of Staunton for most of the 20th Century. When the Rev. Harvey Staunton tragically died in Mesopotamia during the First World War, he was succeeded by his brother George who was to become the Lord of the Manor for half a century.
At the outbreak of the war he falsified his age from 42 to 38 tenable him to join the ranks. Serving in Ypres he won the Distinguished Conduct Medal before being invalided home in 1915.
After the war George entered Holy Orders and for the remainder of his life he devoted himself to the care of three parishes – Staunton, Flawborough and Kilvington and four manors.

On his death in 1965 he was succeeded by his grandson Edmund, then only a young man, who still guards the traditions of Staunton.
Besides being a conservationist dedicated to protecting the countryside, Edmund has adorned his estate with classical pieces of architecture.
These have been designed by Peter Foster, formerly Surveyor of the Fabric at Westminster Abbey, and also his father-in-law. A temple on an island in a small lake is a prominent feature of this glorious landscape, with on the horizon, the looming presence of Belvoir Castle to which they hold the key.

The Stauntons – a family as old as the monarchy – continue to uphold the old values – and traditions of England, and long may they continue to do so.

There Will Always be an England: About the present day Staunton Family, from Country Life Magazine.