“I’M A HUGE FAN OF MONTESSORI”

“MONTESSORI: WE NEED IT MORE THAN EVER!”

‘Staunton Montessori School’ was delighted to welcome celebrity doctor and childcare expert Miriam Stoppard as Guest of Honour at the Grand Opening Celebration for the new premises. Her son, Ed Stoppard, co-star of the Roman Polanski’s The Pianist, also attended the event.

The Montessori School moved into beautifully renovated 19th century barns on the historic  family estate, belonging to the Stauntons of Staunton who are reputed to be the oldest family in England. Anyway – how did a crumbling cattle shed become ‘the ultimate learning environment’? With a generous Rural Development grant from DEFRA, a cathedral architect and an amazingly artistic builder! The school was founded by Robert & Adrienne Staunton in 2001 and now provides for 40 children as well as 20 students in the Tutorial.

Montessori is needed more than ever, as it offers a really special foundation to a child’s life. ‘Children are the future of this world’: Prof. Maria Montessori.

‘Staunton Montessori School’ was delighted to welcome Dr Miriam Stoppard as the Guest of Honour at our Grand Opening Celebration for the new premises on 10th June 2005. Dr Miriam Stoppard led the official inauguration ceremony, which involved a special ribbon cutting, with the children participating in proceedings.  After the enduring and growing success of Dr Stoppard’s books, journalism and media work, we were thrilled to welcome her to the school. She had responded to the invitation to open the new school, writing: ‘It’s a great compliment to be asked & I’m a huge fan of Montessori, all of my grand children go to Montessori schools’.

Doctor, dermatologist and a Fellow of the Royal College of Physicians, Miriam Stoppard is the UK’s best known expert on pregnancy and birth. Dr Miriam Stoppard has been at the forefront of the revolution in health information since she began her writing and broadcasting career in the early 1970s. Since that time she has become well known to millions all over the world as a leading authority on parenting, baby and child care, women’s health, and many other topics from healthy eating to relationships. In 2000 she set up Miriam Stoppard LifeTime, of which she is Chairman and Chief Executive Officer, to extend her philosophy into products and services.

Her blend of medical training (she studied medicine at the universities of London and Durham), business connections (she has been the Director of a number of companies ranging from pharmaceuticals to interior design), and direct experience of the problems of ordinary people (she answers readers’ letters in a column in The Daily Mirror, read by 10 million people every day), have made her uniquely qualified as a writer on health matters. What’s more, she is a parent herself – she has two sons of her own and four step-children – and is now also a grandparent. She knows from her own experience the stresses placed on modern families trying to do their best for their children in a world of uncertain and conflicting advice.

Dr Miriam Stoppard’s ideas and approach, developed and informed by the experience of more than 30 years of writing and broadcasting, remain totally fresh and up-to-date. In 1998 she was made a Fellow of the Royal College of Physicians in recognition of her work in promoting healthcare information, a well-deserved honour that will be endorsed by everyone who has benefited from her practical and sympathetic approach.

Articles which appeared in the local press:

CELEBRITY doctor and childcare expert Dr Miriam Stoppard was in the area recently to perform the official opening of Staunton Montessori School’s fabulous new premises.
The pupils, previously taught in the home of the school’s head teachers and owners Robert and Adrienne Staunton, now benefit from a purpose-built learning environment housed in previously redundant and now totally renovated 19th century barns on the historic Staunton Family estate.
The Staunton Montessori School and Tutorial provides nursery education for up to 40 children aged two to five while the tutorial service is available for up to 20 students between the ages of seven and forty-seven.

MIRROR columnist Dr Miriam Stoppard cut the ribbon to officially open the Staunton Montessori School and Tutorial, Staunton-in-the-Vale, on Friday.
The healthcare expert had been invited by head-teachers Robert and Adrienne Staunton to perform the ceremony and stayed with the couple for two nights.
Robert said: “it was an amazing event. We had a reception for 130 people with champagne and canapés. Miriam is a fantastic person and she made a lovely speech about the worth and benefit of a Montessori education.
“She loved it here and we had a really lovely time:’ 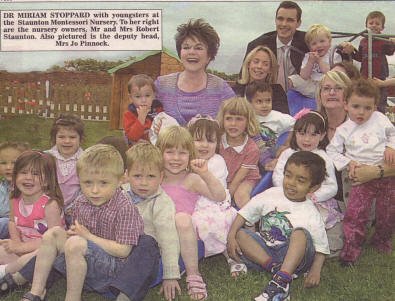 CHILDCARE expert Dr Miriam Stoppard officially opened Nottinghamshire’s first Montessori nursery on Friday. Staunton Montessori Nursery at Staunton-in-the-Vale has been extended, with a former cow shed becoming the main teaching area.
Dr Stoppard, an author, a television presenter and a paediatrician, praised the Montessori approach, and said it was the ideal way to bring up a child.
“The approach allows children to choose according to their skills, and that appeals to me on a very instinctive level,” she said.
She said the biggest gift the teaching approach provided children was the gift of enchantment with life.
The school opened with the help of a grant from the Department for Food and Rural Affairs. The head and managing director, Mr Robert Staunton (30) and his wife, Mrs Adrienne Staunton (31) opened the school four years ago at their home, Chapelside Farmhouse, and have recently completed the conversion of the 19th Century barn into a classroom.
The approach to teaching was pioneered in 1907 by Italy’s first woman physician, Dr Maria Montessori, a specialist in child psychology, who emphasised the need to educate a child’s whole personality as opposed to purely concentrating on the teaching of knowledge.
Children aged two to four are taught in small groups and are encouraged to undertake practical tasks such as tying shoelaces and buttoning coats. 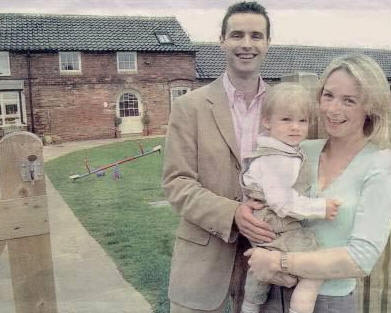 School Building a Joy for Children

While Jamie 0liver does his bit to revolutionise school dinners, head teachers Robert and Adrienne Staunton are spearheading their own revolution – in school architecture.
The couple, who are in charge of the Montessori School and Tutorial in Staunton-in-the-Vale, have gone from teaching in their front room to holding classes in state-of-the-art premises in just four years.
Robert’s father gave them a dilapidated 19th century cattle shed on the family estate and it has been transformed with a grant from the Department for Environment, Food and Rural Affairs’ rural development programme.
Robert, 30, said: “We couldn’t have gone ahead with the plans we had without the DEFRA grant and, obviously, my father donating the building has been a great support. If Jamie Oliver is passionate about school dinners, we are passionate about school architecture. I’m fed up with seeing ugly schools and Portakabin classrooms – all of our children deserve better.”
Around £140,000 was spent on renovating the building and Robert’s architect grandfather Peter Foster, who worked on renovating Westminster Abbey, helped the couple design the school. Robert returned to his Vale of Belvoir roots with his wife and son Ben after studying and working in Edinburgh and Cambridge and says the school is a boost to the community.
He said: “People aren’t always able to go to the pub or meet with friends when they have kids. Friendships have been created here and it can be really meaningful for the parents to get together here in such a beautiful place.”
There are 40 two to five year-olds enrolled at the school and it is registered with the Local Authority, which means parents can claim around £1,520 a year in grants for fees. The school, which employs five teachers, also runs an Early Years Scholarship scheme enabling it to meet its commitment to social inclusion.
Robert says the response from parents has been positive since the school opened in 2001, with some willing to travel up to 20 miles to get there. He said: “It is amazing how far people will travel to bring their children here. We have some coming in from West Bridgford for a four-hour session. To have high specification, beautiful premises is one thing, but to look at the kids and see how happy they are is another.”
Unusually for a Montessori School, the age range is considerable. Twenty students aged between seven and 47 receive tuition. The tutorial students are studying for Oxbridge entrance exams, scholarships with GCSEs. Robert also teaches English language, culture and communication to Japanese managers from Newark company NSK Bearings.
He said: ‘We try to incorporate the Montessori approach into all our teaching which means it Is very person-centred and caring. The job variety is great. I can be teaching, a, two-year-old to paint In the morning and coaching a Japanese businessman in English culture in the afternoon.”
The school and tutorial took up residence in the converted barn in December, but it will be officially ‘christened’ today when Mirror columnist and healthcare expert Dr Miriam Stoppard performs the opening ceremony.

DISUSED 19th-century farm buildings on an ancient Notts estate have been transformed into a new school.
Converting a crumbling cattle shed and hay barn into premises for the Montessori School and Tutorial at Staunton-in-the-Vale cost £140,000 and took a year to complete. But head teacher Robert Staunton said an the effort was worthwhile.
“If Jamie Oliver is passionate about school dinners, we are passionate about school architecture. “I’m fed up with seeing ugly schools and prefabricated classrooms. All our children deserve better.” He added: “My grandfather Peter Foster, who is an architect, designed the project with us. ‘Along with my wife Adrienne and an artistic builder, we have achieved something of merit for the community. “We’ve included many original features of the barn, giving a very organic and inspiring feel.”
The Stauntons founded the nursery school in the ground floor of their home three years ago. They soon needed more space. So with the help of a £54,000 grant from Defra, they decided to convert adjoining farm buildings, which had not been used for agricultural purposes since the Second World War.
The new premises, catering for 40 children aged from two to five, plus facilities for 20 older students, was officially opened by childcare expert and writer Dr Miriam Stoppard on Friday.
Mr Staunton said: “Parents hear about us mostly by word of mouth. The school feeds local primary and prep schools and employs five teachers, including our deputy head Mrs Jo Pinnock.” .
One parent said: I like the friendly and calm atmosphere of the school and the genuine interest and affection the staff have for the children.”
Dr Stoppard said: “I’m a huge fan of Montessori. All my grandchildren go to  Montessori schools.”
The school is registered with the local authority. It costs £15.75 a session for children aged two to five. Parents can claim around £1,520 a year in grants for fees and the school also runs an early years scholarship scheme to assist access.