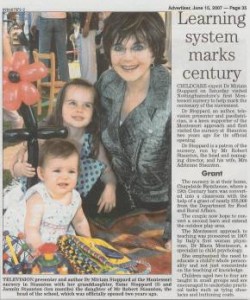 TELEVISION presenter and author Dr Miriam Stoppard at the Montessori nursery in Staunton with her granddaughter, Esme Stoppard and Jasmin Staunton the daughter of Mr Robert Staunton, the head of the school, which was officially opened two years ago.

Dr Stoppard, an author, television presenter and paediatrician, is a keen supporter of the Montessori approach and first visited the nursery at Staunton two years ago for its official opening.

Dr Stoppard is a patron of the nursery, run by Mr Robert Staunton, the head and managing director, and his wife, Mrs Adrienne Staunton.

The nursery is at their home, Chapelside Farmhouse, where a 19th Century barn was converted into a classroom with the help of a grant of nearly £55,000 from the Department for Food and Rural Affairs.

The couple now hope to convert a second barn and extend the outdoor play area.

She emphasised the need to educate a child’s whole personality and not just concentrate on the teaching of knowledge. 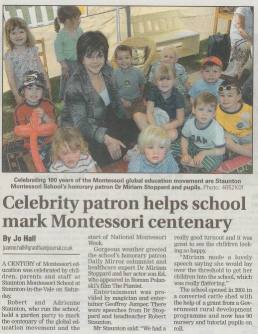 A CENTURY of Montessori education was celebrated by children, parents and staff at Staunton Montessori School at Staunton-in-the-Vale on Saturday.

Robert and Adrienne Staunton, who run the school, held a garden party to mark the centenary of the global education movement and the start of National Montessori Week.

Entertainment was provided by magician and entertainer Geoffrey Jumper. There were speeches from Dr Stoppard and head-teacher Robert Staunton.

Mr Staunton said: “We had a really good turnout and it was great to see the children looking so happy. “Miriam made a lovely speech saying she would lay over the threshold to get her children into the school, which was really flattering.”

The school opened in 2001 in a converted cattle shed with the help of a grant from a Government rural development programme and now has 60 nursery and tutorial pupils on roll.