‘THERE WILL ALWAYS BE AN ENGLAND…’ wrote Sir John Betjeman’s daughter, Candida Lycett-Green in Country Life’s first-ever English number, which featured prominently the historic family of the Stauntons. Some accounts argue that there have been Stauntons at Staunton since before the Norman Conquest, making them the oldest, or one of the oldest, families in the UK. Country Life states:

‘The Staunton family uphold a solid, moving and magnificent side of county life, not in a flashy, title-getting way (as with some who sought the limelight or hung round at court long enough to become ennobled), but with a quiet dignity which has seldom made more than a modest headline. Through thick and thin for nearly 1,000 years, they have held on, even when Colonel William Staunton was fined more than £800 for taking arms against Parliament during the Civil War and returned home to find a devastated house and a much reduced estate.’ 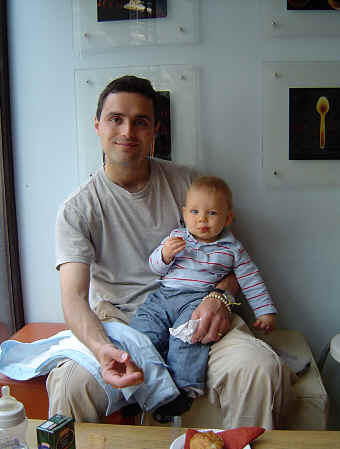 Robert Staunton, pictured here with his son at the Edinburgh Festival, is co-Head Teacher of Staunton Montessori School & Tutorial. He founded the school with his wife in 2001 after graduating from Edinburgh University with a Masters and Cambridge University with a Post Graduate. He said: ‘People wrestled with me about my career choice, suggesting I work in the City, but I just love kids and I have a natural affinity with teaching. I really love my work and I’m completely satisfied.’

Robert worked for a while in inner-city Edinburgh and Nottingham and experienced the rough edge of education. He said: ‘I’d grown up with real advantage and had a brilliant education, so working with kids in the inner cities and also in Third World was a real mission.’ Yet Robert was drawn back this ancestral home of Staunton-in-the Vale and has a new response to family traditions. ‘As the younger son from the landed gentry,’ he said ‘ you’re supposed to join the army or go into the church, but for me running this Montessori School & Tutorial is the way ahead. The job variety is great; I can be teaching a 2-year-old to paint in the morning and coaching a Japanese businessman in English Culture in the afternoon!’ Robert’s family has been incredibly supportive of his aspirations and his father, the present Lord of the Manor of Staunton Hall, has given Chapelside Farm to Robert & his wife, enabling them to open the school. 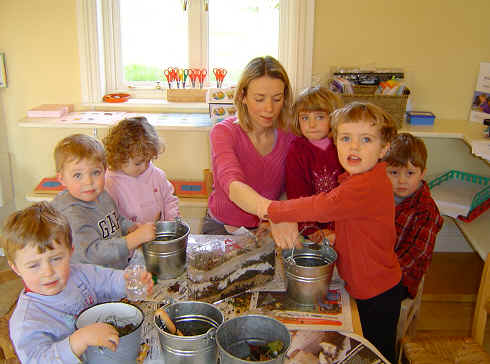 Adrienne Staunton met Robert studying the History of Art in Cambridge and they married in 2001. Adrienne took her Montessori Diploma in Education at the Montessori St Nicholas Centre in London. She also took a Foundation Certificate in Fine Art at Chelsea College of Art and Design. Adrienne has worked in some of the UK’s leading Montessori schools including St Christopher’s, Letchworth; Iverna Gardens, Kensington; and New World, Newmarket. Including this extensive experience in Montessori, Adrienne has also taught in the Pre-prep department of Wellow House School, Nottinghamshire and worked as a Play Specialist in the QEII Hospital in Welwyn. Adrienne said: ‘I just love children and I enjoy making their first experience of school a happy one because I think it sets them up for their future. It’s very rewarding watching all sorts of different characters develop & getting to know them individually.’

Mrs Felicity Marian, the head teacher of London’s premier Montessori School, Iverna Gardens, said: ‘Adrienne is the best teacher that we’ve ever had. It doesn’t surprise me that she’s doing so well.’ Adrienne’s time in top Montessori schools in the South East gave her valuable experience upon which to create her own school community. One parent writes: ‘Staunton Montessori has a home from home feel… Adrienne, in particular, has the perfect personality for this.’