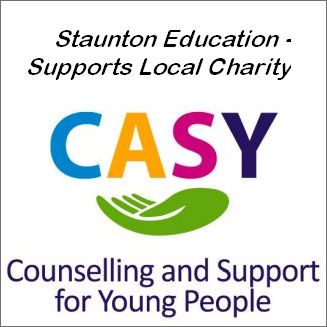 Donate to CASY – Counselling and Support for Young People.

Christmas time should be a season of joy for all young people, but sadly these days more and more young people are struggling with stress and mental well-being issues. By supporting local charities like ‘CASY’ (Counselling and Support for Young People) as well as the national charity ‘Heads Together’, recently publicised by Their Royal Highnesses Prince Harry and William, people can make a transformational difference to mental health, which is an issue that could affect anyone.

One charitable body based in the East Midlands called the ‘Star Trust’ recently had their annual ball at Stapleford Park Hotel raising £122,000 for various charities including CASY. Mr Steve Hampson, local entrepreneur and philanthropist, and a former parent at Staunton Montessori, founded the Star Trust which regularly supports children’s charities. Mr Hampson invited the CEO of CASY, Mr Mick Mason, to make the opening speech at the high-profile ball, attended by some of the East Midlands’ most successful business personalities. Mr Mason drew attention to the plight of children and adolescents who are suffering from anxiety, depression, eating disorders, self-harm and suicidal feelings. Mr Mason cited the recent and tragic loss of a much loved local teenager.

Following this ball, one guest, Mr Robert Staunton, managing director of Staunton Education Ltd said, “Since the brilliant work of the Star Trust we also feel inspired to support CASY, so we’ve made a link with them and have offered our rooms at Staunton Montessori School as a venue for their counsellors, as well as launching a charity fundraiser.”

Mr Mason said, “Being worried about your child is a natural part of being a parent and recent surveys have found that worrying about your child’s emotional health is the top of those worries.” Mr Staunton said, “We strongly endorse the work CASY does within schools, for children and indeed families. Pressures from social media, exams and social changes mean that young people experience greater stress at a younger age. With the increasing difficulty of SATs, entrance exams and GCSEs, children can easily feel overwhelmed.”

CASY delivers thousands of hours of emotional support for young people in Lincolnshire and Nottinghamshire every year, no matter what their needs. Mr Mason said, “As CAMHS (NHS Child and Adolescent Mental Health Services) are so overstretched, we are receiving an increasing number of referrals and we appreciate all the fundraising that people are doing for us, but also it’s about raising awareness and taking a more open and progressive attitude towards well-being and mental health.”

The Honorary Patron of CASY, Barbara Wilkinson, former director of the home and garden retailer Wilkinsons said, “The twenty first century has brought new pressures on young people – pressures to perform, pressures to conform and pressures to demonstrate they are adults perhaps before they are ready. CASY will have an increasingly important role in helping young people at a time when their lives are not just in transition but often in turmoil.”

To donate to CASY this Christmas, please visit the following link: casy.org.uk/support-us/donate

The Staunton Montessori School and Tutorial Centre Christmas CASY charity campaign was held in the final week of the Autumn term 2018 raising £500. Children and staff at Staunton Education wear Christmas jumpers and collect for the charity.

Children in Need, Comic Relief, Save the Children and Mary’s Meals: